March 8th is International Women’s Day. For some countries, it is a holiday and for others, it is a revolutionary movement. However, no matter what events, protests, celebrations, or conferences are organized around us, we regard March 8th as a day to honor women, and remember both their historical achievements and their painful losses.

In Latin America, March 8th – or as it’s been branded in the region, “8M”-  is an intense day of protesting and speaking up against misogyny, injustice, and the always-pressing issue of gender inequality. In the last decade, this day has accumulated more and more momentum, as more feminists demand that their needs and rights be met by their governments. Reproductive rights, equal pay, and femicide are the top three protesting subjects.

Today, there are 69 countries in the world where abortion is legal, although laws vary depending on the number of weeks from gestation a woman is allowed to get an abortion, and some countries in which it is decriminalized but remains mostly inaccessible. The fight for abortion rights in Latin America, called “the green tide”, has been one of the longest and most organized feminist movements in the world. It gained momentum since Argentina legalized abortion in January of 2021, making it the avant-garde country in Latin America regarding reproductive rights, up until a few weeks ago. On February 21, 2022, Colombia’s Constitutional Court decriminalized abortion and ruled it legal up until week 24 of pregnancy, the longest period in Latin America.

This positive shift, which by no means extends to the rest of the religiously-conservative region (as of March 2022, out of the 33 countries in the region, abortion is only legal in Uruguay, Cuba, Guyana, Argentina, Colombia, and in 4 of 32 states in Mexico), comes just as the U.S Supreme Court seems ready to end Roe v. Wade, the 1973 legal case that guarantees a constitutional right to the procedure.

On the other side of the coin, pun unintended, equal pay is still not a reality. According to the World Economic Forum’s Global Gender Gap Report, the time needed to close the global gender gap has increased by a generation from 99.5 years to 135.6 years. In most places, women are still met with discrimination and wage inequality in the workplace. Even though there have been continuous efforts for the gap to close — in countries like the United States, as of 2021, a woman was paid 82 cents for each dollar given to white men. Ethnic minority communities living in the U.S. are often paid less because of disparities between race, gender, and class. For example, Latina women living in the U.S. only make 57 cents to a white man’s dollar, equivalent to $28,911 less for a year of full-time work (IPWR).

Femicide in the region and in the rest of the world are a tragic and daily reality. In the beginning of 2020, 10 women were dying every day in Mexico from femicide, which caused millions of women to mobilize in a historic day called “A day without us,” on the day after International Women’s Day, March 9th of 2020. Tens of thousands of women vanished from the streets, offices, and classrooms. This absence from public spaces was intended to be a reminder that every day, women are killed and disappear forever. They froze 40,000 million pesos of the country’s economy.

8M is a day to consider, and maybe even celebrate, our achievements, but by no means is it a happy day. It is not a day to congratulate women. It’s a day to recognize the severe inequalities that women are faced with daily against our most painfully obvious wishes. A day to honor our suffragist sisters, activists, theorists, and feminist collectives who find the strength to organize in the face of injustice. A day to continue the fight and remind ourselves that we are still a long way away from a just social system. Mostly, it remains a day like any other. 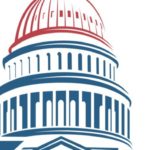 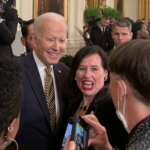 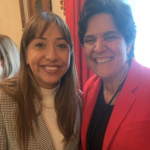